Would'nt it be a blast if they decided to sail the next Americas cup in the Glen class.  It would certainly do a lot for our profile.  One would see a big jump in the number of new Glens being built.  Second hand Glens would be in demand as trial Horses.  Of course one would have to stick to the original plans as drawn up by Mylne.   Built in wood with wooden spars and no winches.  I suppose one could have instruments and a choice of three or four crew, maybe utilising the weight restrictions such as they have in many classes.  Certainly the racing would be more exciting than the present spectacle from the San Francisco Bay.

The Americans were often accused of keeping the Cup because of the rule that the challenger had to sail on ‘its own keel’ to the competition.  Thus the Challenger always had to be a sturdy cruising boat.  It might be no harm if they were to revive this rule.  The present wing masted vessels are hardly sailing boats at all and certainly could not survive a simple gust 5 knots above their designed wind speed limits.  Never mind cross the Irish sea or venture further afield.  Not to mention a cabin and bunks.

Bring the Americas Cup back into the ambit of the gifted, well financed, amateurs who used to get so much fun out of it.  The Liptons, Bonds,  Biche’s and Turners.  Take it away from the rocket designers, lawyers, and spacemen who currently control it.   The Dark Lord Larry Ellison has a lot to answer for.  He should be made to walk the plank. 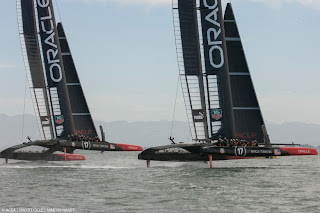 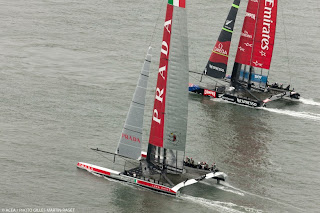 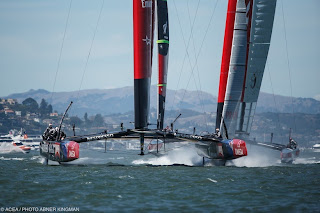