Last nights race  (Thursday 1st Aug) was a humdinger.  The race officer put the wind at Force 4 but I think it was gusting at times well into force 5.  Well at the limits of where these wooden boats over 50  years old should be racing.  But it makes for much more exciting sailing than drifting about in the tide hoping for wind.  Which has been the situation for the past month or so.

Jerry was crewing.  And he also managed to get the time to take the attached photos.

We got a super start, more by accident than anything.  Simply good timing and then tacked immediately to clear our wind and beat into Scotsmans Bay avoiding the end of the flood.  I judged the tack back on to starboard to fetch the first mark spot on.  Other Glens took a safer course and in fine style we rounded the first mark in the lead.

It was all down hill from there, holding on to the rail but being overtaken on the long downwind leg. 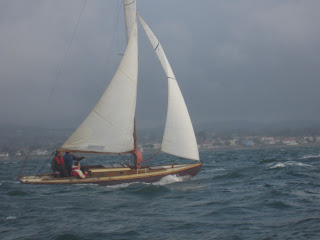 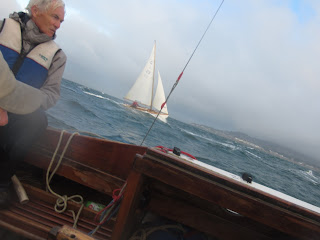